Edrice Femi "Bam" Adebayo (born July 18, 1997) is an American professional basketball player for the Miami Heat of the NBA. He played college basketball for the Kentucky Wildcats before being selected by the Heat with the 14th overall pick in the 2017 NBA draft. He was named an NBA All-Star and voted to the NBA All-Defensive Second Team during the 2019–20 season. 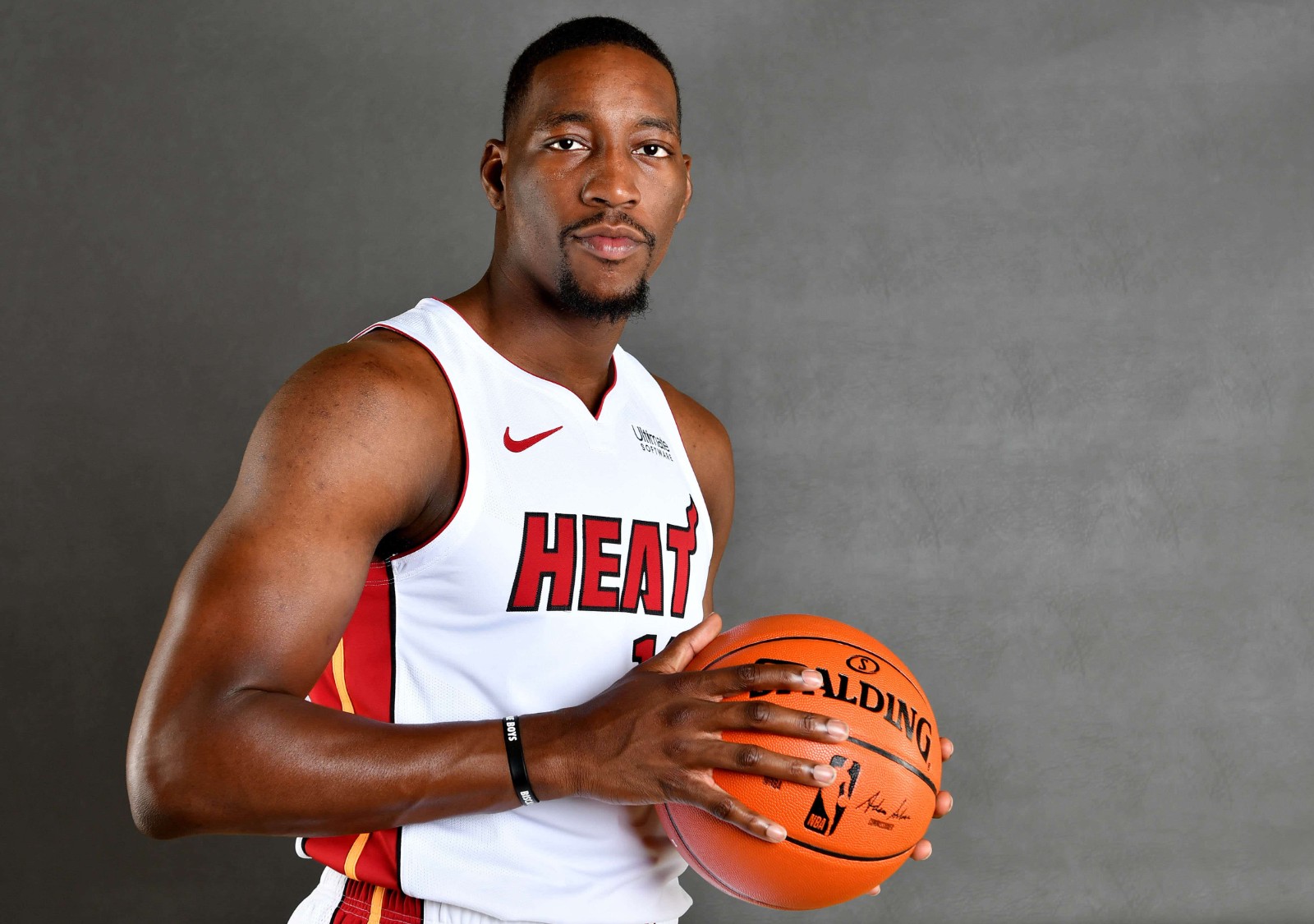 Bam Adebayo is an American professional basketball player for the Miami Heat of the National Basketball Association (NBA). He played college basketball for the Kentucky Wildcats before being selected by the Heat with the 14th overall pick in the 2017 NBA draft. He was named an NBA All-Star and voted to the NBA All-Defensive Second Team during the 2019–20 season.

Adebayo was born in Newark, New Jersey to a Nigerian father and an African-American mother. As a child, he was given the nickname "Bam Bam" by his mother when, while watching The Flintstones at age one, he flipped over a coffee table in a manner similar to the show's character Bamm-Bamm Rubble.Adebayo is of African American and Yoruba descent.

Adebayo moved with his mother to North Carolina when he was seven years old.He attended Northside High School in Pinetown, North Carolina where, as a junior, he averaged 32.2 points and 21 rebounds a game. During the summer, Adebayo joined his Amateur Athletic Union (AAU) team, Team Loaded North Carolina, alongside fellow five-star 2016 recruit Dennis Smith Jr. He averaged 15.0 points and 10 rebounds per game on Adidas Uprising Circuit. Later that summer Adebayo competed at the NBPA Top 100 Camp and was named MVP at the 2015 Under Armour Elite 24 game. After his junior season at Northside he transferred to High Point Christian Academy in High Point, North Carolina. In his season debut, Adebayo scored 22 points and 17 rebounds in an 81–39 win over New Garden Friends School. On December 29, he posted 26 points and 14 rebounds in a 91–63 victory over De'Aaron Fox and Cypress Lakes High School.As a senior, Adebayo averaged 18.9 points per game, 13.0 rebounds per game, 1.4 blocks per game and 1.5 assist per game, and led the Cougars to a NCISAA state championship appearance. 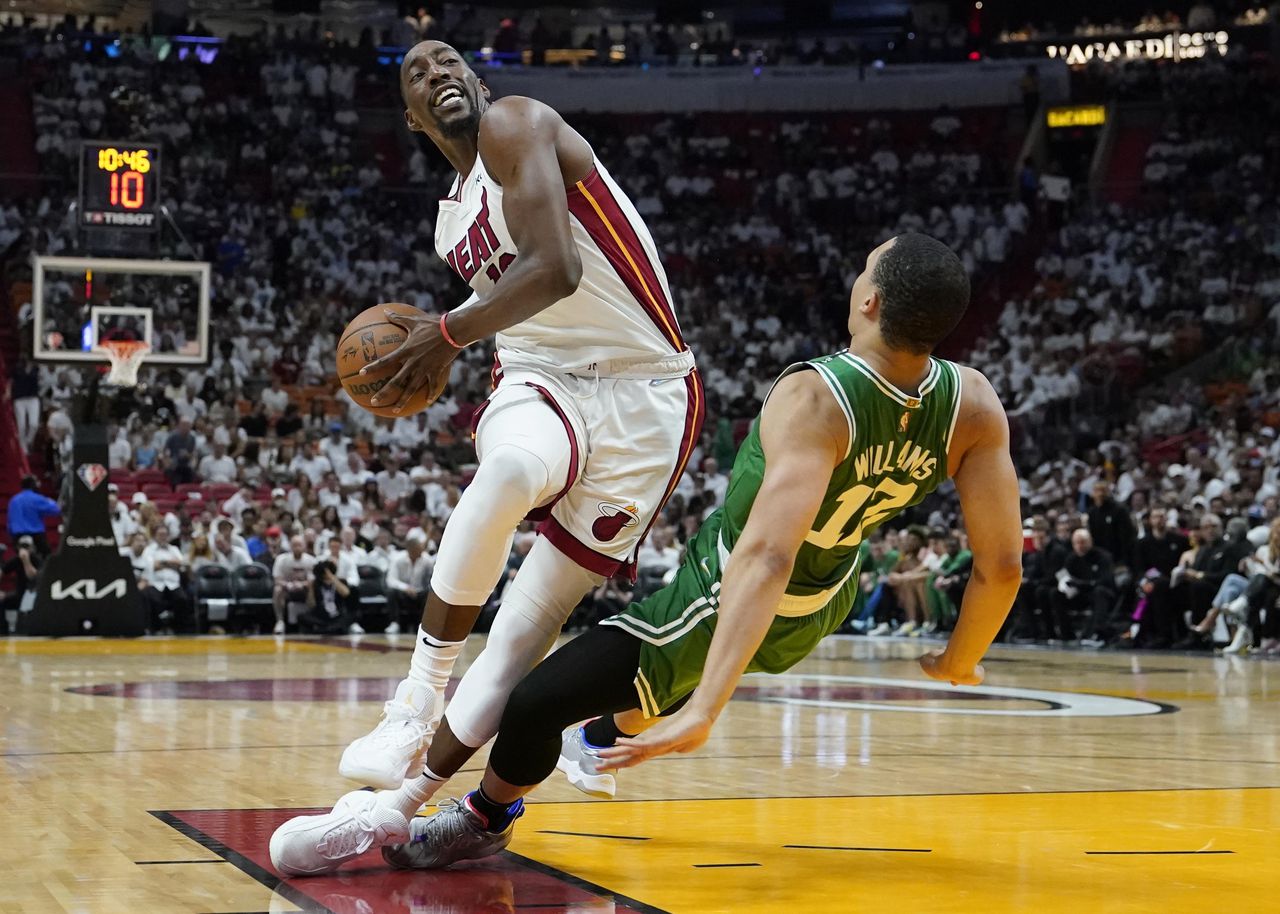 On June 22, 2017, Adebayo was selected with the 14th overall pick in the 2017 NBA draft by the Miami Heat.On July 1, he signed his rookie scale contract with the Heat,and joined the team for the 2017 NBA Summer League. In his rookie season, Adebayo appeared in 69 games for the Heat and averaged 6.9 points and 5.5 rebounds per game.

On December 10, 2019, Adebayo recorded his first career triple-double with a career-high 30 points, 11 rebounds and 11 assists in a 135–121 overtime win against the Atlanta Hawks. On December 14, he had his second career triple-double in a 122–118 overtime win over the Dallas Mavericks, scoring 18 points with 11 rebounds and 10 assists.On December 16, Adebayo was named Eastern Conference Player of the Week for the games played from December 9 to 15, when he averaged 20.0 points, 11.3 rebounds, 8.7 assists per game. On January 27, he recorded 20 points, 10 rebounds and 10 assists in a 113–92 win over the Orlando Magic. On January 30, Adebayo was named to his first NBA All-Star Game. On February 15, he won the NBA All-Star Weekend Skills Challenge competition.At the end of the 2019–20 season, Adebayo finished as runner-up in voting for the Most Improved Player Award. He was also named to the NBA All-Defensive Second Team and finished fifth in voting for the Defensive Player of the Year Award.

On November 28, 2020, Adebayo signed a five-year contract extension with the Heat.On February 18, 2021, Adebayo logged his first triple-double of the season with 16 points, 12 rebounds and 10 assists in a 118–110 win over the Sacramento Kings.Teammate Jimmy Butler posted 13 points, 10 rebounds and 13 assists, making them the first pair in league history to register triple-doubles in the same game more than once.

Are you a fan of Bam Adebayo? If you are looking for Bam Adebayo jersey, look no further. Thejerseys is the top destination for any cheap NBA gear. Shop Bam Adebayo shirt available in custom, Swingman and replica styles for men, women and kids so every fan can show their support in a gameday style they love. Browse our great selection of Adebayo jersey and other gear to complete your wardrobe.